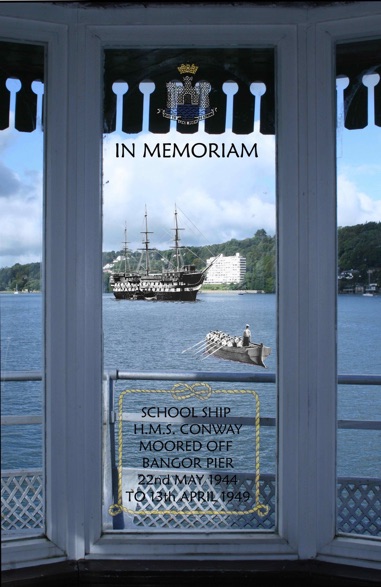 The ship was moored at Glyn Garth off Bangor Pier from 22nd May 1941, moving there to avoid the bombing of  Merseyside which had come close to sinking her. She remained at Glyn Garth until 13th April 1949 when she moved to Plas Newydd. Bangor Town Council (who own the pier) agreed to the installation of a memorial window in the seating kiosk at the end of the pier that overlooks the ship’s old mooring. An “opening/dedication” ceremony’s held at 1130hrs on Saturday 13th May 2017 – 76 years almost to the day that the ship passed the end of the pier en route to her new mooring. There was a parade of local Sea Cadet units led by the band and cadets of TS Conway and A buffet lunch in the University afterwards.

Photos of the dedication day are here. BBC Coverage is here.

A number of benches on the pier are dedicated to OCs and these were re-furbished and co-located on benches in the kiosk. 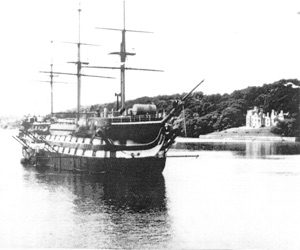