James Paul Moody was 6th Officer of the Titanic and lost his life when the ship foundered. 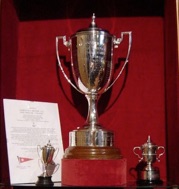 James is known to Old Conways for the Moody Cup, which was presented to the Ship by his family as a memorial following his death. It was awarded to the winner of a series of sailing races held annually from 1913 to 1974 when Conway paid off. It is now displayed in the Conway chapel. It is awarded today by the Conway Club Cruising Association for the best log submitted each season.

Although he came from Scarborough, there was nothing in the town in his memory. The Friends therefore worked with the Scarborough Civic Society and the RNLI to erect a fitting memorial and a plaque was designed by David Hillhouse for the Scarborough Life Boat House on the seafront.

The plaque was unveiled on 14th April 2002, 90 years to the day from the loss of the ‘Titanic’, by Mrs. Mary Conlan, great niece of James Moody who was accompanied by other members of the Moody family. The plaque is represented below. 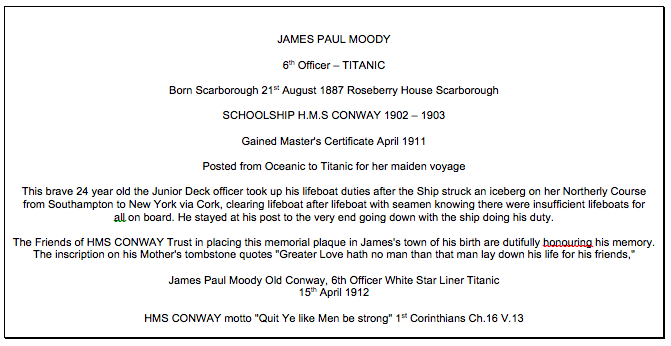 Blue Plaque
On 14th April 21012, exactly 100 years after Titanic sank a blue plaque was unveiled at 14 Granville Road, Scarborough where Moody was born in 1887. 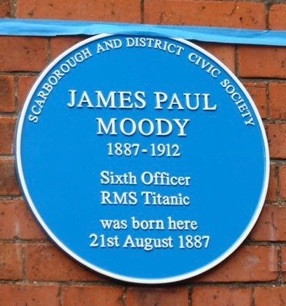 The Friends master-minded the erection of the plaque working closely with the residents of the house (now flats) to persuade Scarborough Civic Society to agree to a plaque on the house.