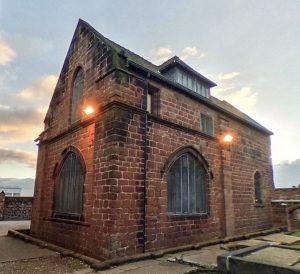 Birkenhead Priory sits on a rocky outcrop above Cammell Laird shipyard on the southern, Birkenhead bank of the River Mersey and overlooking Conway’s old moorings in the Sloyne off Rock Ferry Pier. The Priory was founded in 1150 by Hamon de Masci, 3rd Baron of Dunham Massey for the Benedictine Order. It is the oldest building on Merseyside, a Grade I listed building and a Scheduled Ancient Monument. It was closed by Henry VIII when he dissolved the monasteries.

St Mary’s Tower was part of Birkenhead’s first parish church, opened in 1821 in the grounds of the priory. The church closed in 1974 and was partly demolished a year later, for reasons of safety. Only the former church tower and parts of the outer walls were retained in situ. The tower has since been refurbished and is dedicated to those who died in HMS Thetis. 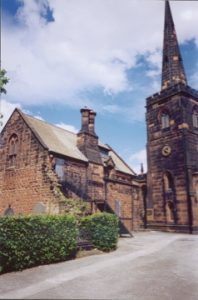 It also contains the final remains of the Conway mast. There are splendid river views for the top of the tower. Click here for more photos Use your “Back” button to return

The  Priory has two working chapels. The first is part of Birkenhead Priory Parish and is a small 12th Century vaulted chamber which seats a congregation of about 60. It celebrates Sunday services and holds baptisms and weddings.

Above this is the Sciptorium which is home to the HMS Conway Chapel which acts also as a Conway museum holding the memorials and many other items which were once in the HMS Conway Chapel in Anglesey. it is a remarkable and very moving place, full of important artefacts. The Conway Chapel holds a service on Remembrance Sunday, which is well supported by Conways and their families, and occasionally other services on special occasions. It is open at other times by appointment. 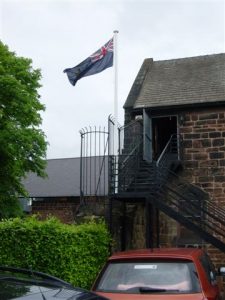 The entrance is up a flight of metal stairs to a very secure door into the chapel. A small flagpole wears the Conway ensign when the chapel is open. Use the Contact Us button to arrange a visit.